Celestial Dragon Academy
This will be fun. By joining this academy you have already made a great decision and everything that comes afterwards will be even better. the first few things you want to do is make an introdution and get tested to be put in a dorm after that its up to you.

The only place where eating dragons is the norm

Phantom Beasts:
A group of mostly Beast-warrior type monsters, the phantom beasts revolve around getting their support monsters into the graveyard, and utilizing their strong main monsters to control the field. With the added Support of the Fire Fist Archetype, the Phantom Beasts can have an answer to any problem with versatile Xyz capabilities, and control the field even more.

Phantom Beast Rock-Lizard:
While not imposing at 2200 ATK, Rock-Lizard sports a nice set of abilities, which make it a force to be reckoned. As it is a beast-warrior, it can overcome it's low ATK with the help of the Fire Formation Spells and Traps, or with Horn of the Phantom Beast. Even one Cross-wing in the graveyard puts Rock-Lizard at a respectable 2500 ATK, more if you used Fire Formation Tensu to summon it in one turn. Once this formidable beast hits the field, when it is destroyed by your opponent's card effect, it deals 2000 damage.

Vorse Raider:
I chose to include Vorse Raider rather than Gazelle for a few reasons. Vorse Raider is DARK, meaning it can help set up Chaos plays. It is a Beast-warrior, rather than Gazelle, which is a beast, and can thus be supported by the Fire Fist. It has 1900 ATK, which means even with 1 Fire Formation Card on the field, it can activate Deck Destruction Virus.

Problem Decks:
Due to its well-rounded nature, this deck doesn't have any real problem decks. It does suffer against deck-out decks, due to its high searching power. The main weakness is from siding. A deck utilizing Rivalry of the Warlords or Overworked could quickly shut down the deck.

Optional Techs:
As with any Rank 4 deck, the amount of options in astounding. My extra deck is built with versitility in mind, but it could be rebuilt for a Rank-Up style of play. More DARK Xyz monsters could be included to utilize the virus cards more effectively.
https://www.youtube.com/watch?v=5k8Z1CWTchw 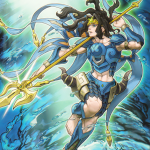